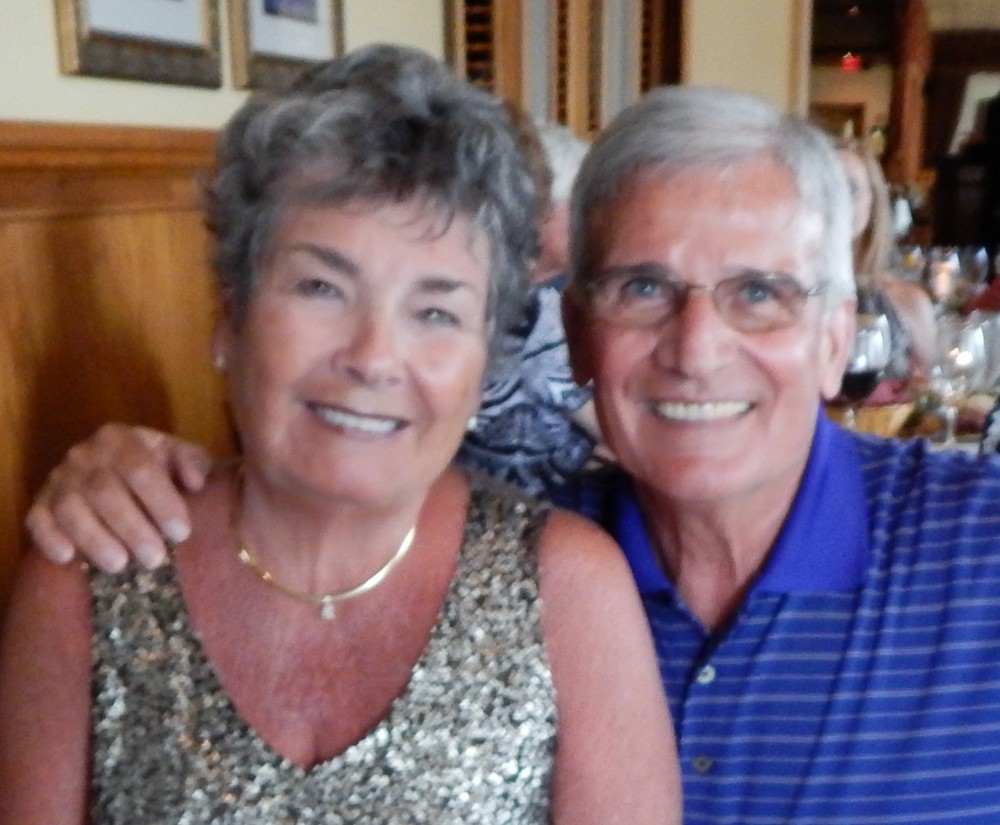 Devoted son of Rose and the late Frank. Brother of Judith. His passions were his faith, family, love of country, history, golf, sailing and any activities with his grandchildren.

After graduating from Geneva College, he served his country as a Naval Aviator for 13 years, achieving the rank of Commander. His civilian career was spent as a business executive, retiring from Citibank in 2007.

In lieu of flowers, contributions may be made to Vermilion, E & R Church Scholarship Fund. A Celebration of Life Service will be held, at 11 am, Saturday, April 28, 2018, at Vermilion E & R Church, 752 Grand Street, Vermilion, Ohio 44089. Arrangements were made by Malloy - Esposito Crematory & Funeral Home in Cleveland, Ohio

Dick and Ruth Partington were married for 51 years and during that time they created a partnership that was built on faith and enduring love and commitment to one another. The Class of 1961 remained a high priority for Dick over the years and he worked very hard to keep its members connected, holding regular reunions and in recent years he added a class website. While carrying out his responsibilities to the class, Dick received encouragement and ongoing help and support from his wife, Ruth.

When Dick lost his battle to an aggressive infection and departed this earth to be with his Lord, one of  Ruth’s many concerns and challenges included addressing Dick's commitment to the Class of 1961 and its upcoming reunion. She reached out to close friends, Terry and Pam Krivak and asked for their help by taking responsibility for the class bank account and Dick’s class records.

Ruth was invited to attend the Class of 1961’s 57th Anniversary reunion and Birthday celebration. After a great deal of thought and consideration, she decided to address the class in a letter.

Ruth's heartfelt letter is shared below.

Warm greetings to all of you,

Terry and Pam Krivak graciously invited me to join you today but writing a letter seemed a better option. Let me assure you that both Dick and I are with you in spirit, at this event, which he eagerly anticipated! Your kind words in remembrance of him, in cards and also your website, were appreciated by our children and me and a huge thank you goes to Russ Greata who effectively captured Dick's character and lifestyle in his eulogy. My youngest son exclaimed, "He nailed it!" and indeed you did, Russ! Thank you.

Dick fought like the warrior that he was, to conquer the superbug and sepsis, several times over, during the 2 1/2 months he was at the Cleveland Clinic. We both thought he would come home and believed the whole time that he would recover. The professionals at the Cleveland Clinic were amazed at his sheer strength and determination. There were multiple setbacks, but, many times over, I heard the words,"-----most people wouldn't have made it this far". They were actually shocked at his age!

He was discharged in late April to a step-down facility where rehab and continuing care would have ensured a full recovery. In the last 24 hours, however, another sudden, debilitating and acute infection simply attacked his body and he did not have the resources to fight another round. We are still grieving his loss.

On the day he was informed that surgery was necessary, one of our sons asked Dick if he was concerned. I must share with you the answer he gave. He said, "Nathan, I am a child of God. I will be on this earth not one day less or one day longer than He has planned". Dick walked closely with his Lord and I would be remiss, on Dick's behalf, if I did not include one reference of evidence for his statement, which we both so completely embraced. Job 14:5 states "Man's days are determined; you have decreed the number of his months and have set limits he cannot exceed."

Thanks to all of you for offering kind accolades to Dick (and me!) over the years and appreciating his efforts in administering the class of '61 reunions. I salute and appreciate Terry K. Terry D, Russ G., and the rest of today's committee for picking up the baton and carrying forward the traditions that Dick enjoyed.

Enjoy your time today and again, my thanks for your support and encouragement.

On April 21, 2018, we lost an exceptionally good man, good for so many more reasons than he was our excellent BFAHS 1961 Class President.

The impressions I have of Dick suggest that we spent much time together, but reflecting back, I realize how few times we actually did share, and all of these were group settings.  So how could I feel so certain that my assessments are based on enough knowledge?  In the same way that any of us ‘knows’ another—based on our personal perceptions during times together (including emails) and based on inferences we draw from times together, from reports from others, and from what a person has done in their life.  Stated this way, it may not sound like much of a basis, but I feel strongly that I have it right:  Dick was a really good guy who lived life fully and well while projecting humility regarding himself and caring regarding others.

Dick was an unassuming guy who did not stand out in the obvious ways of star athletes or of performing artists or of geniuses or of highly extroverted people.  Yet, he was very popular and often chosen to lead.

Very friendly, freely engaging with others, having a genuine smile, always readily forthcoming, Dick seemed truly interested in the person he was talking to.  He listened to them and only spoke of himself if prodded.

Dick also had a great sense of humor, but he was not one, seeking attention, to take the floor to entertain others with his wit.

He was deeply religious, but, barring a spiritual discussion, you wouldn’t know it from him.  Whether religion or any important issue, it’s not that Dick did not hold strong views, but in any everyday discussion with friends, he was not one to push himself or his views on anyone.

Just hanging around Dick in a group could enrich your life.  He supported everyone and never introduced negativity of any sort.  You came away just feeling better knowing that here was one of those people who somehow manage to be the glue of society.

In all settings, his manner made those around him feel comfortable.  Not through obviously outstanding specific skills, not through blind ambition, but through his way with people, Dick conveyed the idea that he would get the job done while caring for the people doing it.  Dick’s rise in the business world demonstrated that he did have the right set of skills.

Finally, a characteristic not often included in this kind of memorial:  Dick was brave.  I base this assessment primarily on his volunteering to fly US Navy helicopters on important defensive missions.  Many of our citizens are unaware of how many of our military are killed just in training exercises.  Conducting actual military operations is dangerous work in general; flying Navy helicopters entails a considerable risk of harm.  Yes, he was brave, but when I was quizzing Dick on what he did in the Navy, he did not say a word about the danger involved.

Without fanfare, Dick served his country, his community, our high school class, his friends, and his family for whom he was a beloved husband (to his wonderful wife, Ruth), father, and grandfather.  His is a life lived that I so admire.

I am sad that my friend, Dick Partington, is gone.  And I’m sad that the world has lost such a man.